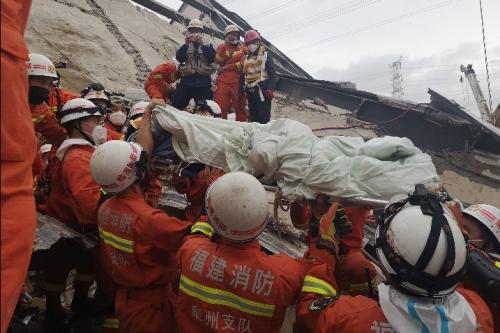 Man rescued from debris after 69 hours

By Hu Meidong in Fuzhou, and Palden Nyima in Lhasa | chinadaily.com.cn

A man was rescued on Tuesday afternoon after 69 hours buried under the debris of a collapsed hotel in Quanzhou, Fujian province.

The collapse occurred on Saturday night, and the hotel owner has been arrested. The cause is under investigation.

Rescuers from the Quanzhou fire rescue detachment were combing the scene on Tuesday afternoon when they found signs of life using detection devices at 1:30 pm.

They immediately narrowed the search range using specialized equipment and by knocking and listening for answering knocks from a possible victim.

At 2 pm, rescue workers heard knocking from the trapped man in a cavern in the debris. They communicated with the man to comfort him and rushed to get him out.

Because the collapsed wreckage was a complex mix of various construction materials, including metal beams and steel and concrete slabs, the work was difficult.

By digging a tunnel big enough for one person in the direction of the trapped man, rescuers finally reached him and extracted him from the rubble at 4:38 pm.

By 6:40 am Wednesday, among the 71 people trapped, 68 people had been rescued from the debris and of them 26 had died.