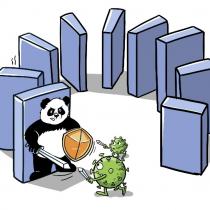 Outbreak to have limited impact on economy

The novel coronavirus outbreak not only poses a threat to public health but also has affected production activity and economic operations. Still, the epidemic's impact on the macroeconomy would be short term.

In China, the epidemic has had an impact on various industries and the overall economy. Globally, the novel coronavirus outbreak has mainly affected countries that have close market and industrial connections with China.

In terms of investment, as a consequence of the outbreak, many large-scale investment projects cannot start to work now, which will affect not only the manufacturing industry, infrastructure construction and real estate investment but also service sectors such as logistics and finance.

In terms of consumption, industries that rely heavily on customer flow, including catering, retail sales, tourism, films, airlines and hotels, may see a sharp decline in business.

And in terms of trade, China's exports of goods and services will decline in the short term because of the temporary closure of enterprises.

Among the three, consumption has been most affected by the epidemic, especially because Spring Festival is also the traditional peak period for retail sales. Since enterprises complete the export orders before Spring Festival and investment projects are suspended during the festival, they would suffer less because of the epidemic.

Also, in the short term, labor-intensive enterprises may find it challenging to increase production due to the epidemic. And small and micro businesses would find it more difficult to get financing until the economic and social order returns to normal. In particular, the lower-income group would suffer the most due to the increase in the prices of commodities and the uncertain job market.

As for the global economy, it will be directly affected, in the short term, if China's economy slows down, simply because the Chinese economy is the second largest in the world and closely connected with global economy.

In the trade and business field, since the United States and many European Union countries import consumer goods from China on a large scale, they too may see an increase in commodity prices.

China is closely connected with many economies including those of the EU, the US and Japan through the global industrial chain. As China is a major processing and manufacturing base for many of these countries' enterprises, the temporary closure of plants in China will disturb the industrial chain of upstream enterprises in those countries, especially in the electronics, information technology and auto industries.

In addition, foreign enterprises' businesses in China will be affected by the epidemic－in fact, Apple has already suspended its retail stores in China.

Also, some countries have imposed a travel ban on Chinese people and cancelled flights to and from China, which will undermine the flow of personnel and students. And the major overseas tourism destinations of Chinese people including Japan, Thailand and the Republic of Korea will suffer tourism revenue loss.

Since China is a major consumer of energy and other resources, global raw materials and financial markets will also be affected in the short term because of the closure of some Chinese factories due to the epidemic.

But in the long run, the epidemic's impact on the Chinese and global economies will be limited. Besides, the epidemic will not change the strong fundamentals of the Chinese economy which includes a huge domestic market, complete industrial and supply chains, good infrastructure and demographic dividend.

Moreover, unlike some US politicians' claim, manufacturing industries are unlikely to flow back from China to the US, because the cost of moving a complete industrial chain and cultivating industrial supporting capacity would be huge.

If the epidemic is contained by the end of March, China's economy is likely to stabilize by the second quarter of this year, and its impact on this year's economic growth will be minimized. And if more proactive fiscal and monetary policies are implemented to cope with the negative impacts of the epidemic, China can still achieve a GDP growth of 5.5 percent this year.

The author is a researcher at the China Center for International Economic Exchanges. The views don't necessarily represent those of China Daily.