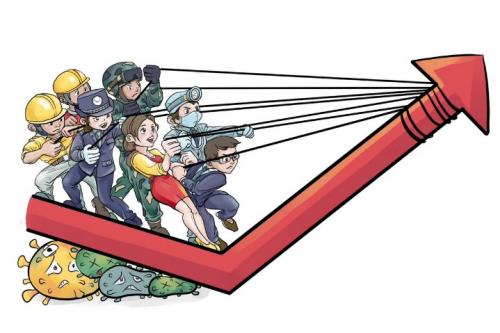 More than 180 teams comprised of over 20,000 medical workers have been dispatched from across the country to support Wuhan, the epicenter of the epidemic. The military also sent 2,600 more medical workers on Thursday, Guo said.

To treat the large number of critically ill patients in Wuhan, more than 7,000 of the health workers are trained in critical care, which should help reduce the mortality rate, she added.

So far, three teams, led by academicians Zhong Nanshan, Wang Chen and Li Lanjuan, have been helping Wuhan and the rest of the country, by strengthening consultation and treatment of critical patients, she said. The three teams are also exploring new drugs and therapies to devise effective methods to guide nationwide medical treatment .

Guo said the National Health Commission had also sent high-end medical equipment as well as staff members from its affiliated hospitals, including the strongest ones in critical care.

Apart from Wuhan, 16 other cities in Hubei also hit by the epidemic have received help from 19 provinces, including Jiangsu, Guangdong, Shandong and Zhejiang.

In recent days, the 19 provinces have dispatched 25 teams of over 3,500 medical workers to the 16 cities, she said, increasing their medical staff capacity by 50 per cent.

"Treating patients is the top priority of the current epidemic control work," Guo said. "We have mobilized the power of the whole country and are resolutely striving to increase the cure rate and reduce the infection rate and fatalities."