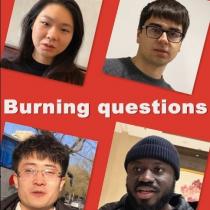 2020 is set to usher in a new decade for us. Predictions and questions abound as to where the next decade will take us.

We took to the street to find out what issues most concern the people among us. Watch the video to see the answers from the experts!

Technological advancement and privacy protection - can we have it all?

5G and blockchain technology have been all the rage in the past year - and will likely continue to be for years to come. High-speed wireless technology is expected to launch across the world by 2020. Another highly coveted form of technology is blockchain, which records transactions like a highly secured ledger. Many are eager to see how these cutting-edge technologies will be applied, and in what fields.

While excited about all the new technological advancements, people are just as worried about data safety and the protection of personal information.

Pork and property prices as well as overtime work regulations stand at the center of livelihood-related concerns.

Amid news about the fluctuations in the prices of fruit, pork and larger items such as real estate, people wonder if the cost of living in China will continue to climb in the coming year.

The much-debated work schedule "996", which requires employees to work from 9 am to 9 pm six days a week, has also raised some concerns among interviewees. Is such a demanding work schedule legal? Are there any laws in place to regulate employers?

Political issues of greatest concern to interviewees are the developments in Hong Kong unrest, cross-Straits relations and the Sino-US trade war.

Seven months in, the Hong Kong protests have strained the local economy and prompted many to search for the root cause of the issue and ask when the unrest will come to an end.

On another front, Taiwan is set to hold elections in January. The "pro-independence" Democratic Progressive Party has been trying to use ideological confrontation with the Chinese mainland to sway voters, leaving many to question if the cross-Straits relations will deteriorate in 2020.

Another issue in the spotlight is the development of the Sino-US trade war. The Trump-initiated trade war has simmered for almost 18 months and has seen tariffs imposed on hundreds of billions of dollars worth of goods on each side. China and the US have negotiated on a phase one trade deal at the end of 2019. Many are eager to know when the trade war will end.