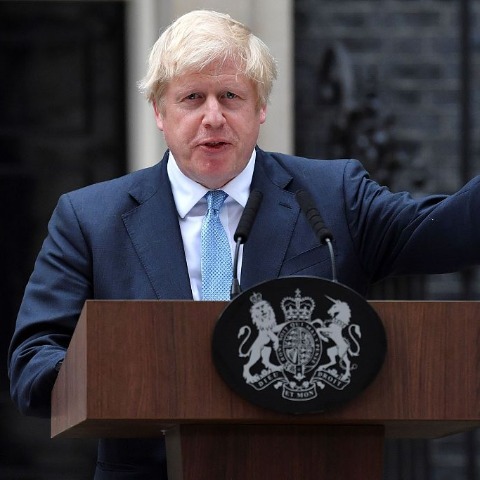 The Brexit farce and a test for Western democracy

For British Prime Minister Boris Johnson, the general election on Thursday is the only way to end the long-drawn Brexit deadlock. If his Conservative Party wins the election, Johnson would try to complete the Brexit process within weeks.

Johnson has already announced his plans for the first 100 days in office should he win the election. And not surprisingly, topping his agenda is his plan to pass the Brexit Withdrawal Agreement to ensure the United Kingdom's exit from the European Union by Jan 31.

Johnson has said that by the end of next month, the UK "will have got Brexit done, and you will find, what will happen is the parliamentary agony will be over, the political agony will be over and the misery and tedium and procrastination that (has) been going on will be over".

For people in the UK and those in the rest of the world, Brexit has become a farce, not least because the Brexit process has lingered for more than three years.

Before Thursday's election was called, Britons in general had lost confidence in Johnson's government. In fact, many are still worried about the possibility of no-deal Brexit. As hard-core Euro-skeptics joined Johnson in the Cabinet, the potential risk of a no-deal Brexit and eventual suspension of Parliament raised grave doubts among UK citizens over Brexit's goal.

Given the complicated legislative procedure and the previous Brexit deadline of Oct 31, Parliament passed the Letwin Amendment put forward by Oliver Letwin, a rebel Tory MP, on Oct 20. Which triggered the Benn Act that forced Johnson to seek a new Brexit deadline, which now is fixed for Jan 31.

Although the 2016 referendum was in favor of Brexit, the Labour Party, Scottish National Party and the Liberal Democrats now insist Britain stay within the EU.

Moreover, according to leaked documents, British officials have warned about Johnson's agreement with Brussels over the arrangements to be put in place in Northern Ireland once the UK leaves the EU. The complex agreement on trade and economic ties between Northern Ireland and Britain requires a series of tariff and border inspection plans to be implemented. But the document cautions that there is not enough time to install all the operational systems needed to implement the renegotiated Northern Ireland elements in the Brexit Withdrawal Agreement by the end of this month.

The document also cautions that some versions of the Brexit deal in Northern Ireland "could lead to a domestic judicial review" that could see the government's deal being challenged in court.

Yet the EU attitude toward Brexit has been pragmatic. On the one hand, it demonstrated that it has run out of patience. On the other hand, it has taken measures to ensure neither side suffers, and has agreed to extend the Brexit deadline on the basis of the situation on the ground.

Therefore, Brussels not only aims to safeguard the interests of EU member states, especially Ireland, but has also warned other EU countries to avoid sinking into a UK-like situation. The EU also wants to avoid suffering any collateral damage brought about by the bickering of British parties.

That the UK, despite being a pioneer of representative democracy, has not been able to complete the Brexit process even after more than three years shows Western democracy is neither as representative nor as efficient as is claimed. It is therefore fair to say that Western democracy, which Francis Fukuyama in his End of History and the Last Man claimed to be the best political system in history, could still do with some improvement.

The author is director of the Center for European Studies and Jean Monnet chair at Fudan University. The views don't necessarily represent those of China Daily.