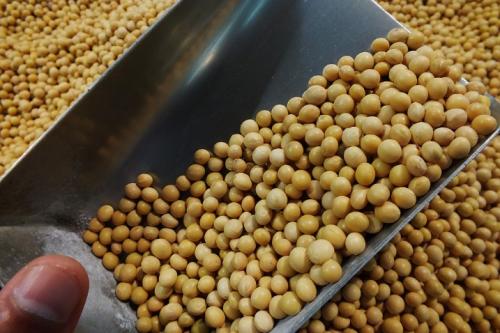 BEIJING - China has developed a new variety of high-yield soybean and has tested it in a trial planting area, according to the Chinese Academy of Sciences (CAS).

The new variety of soybean named Henong 71 was planted in the test fields in Shihezi, Xinjiang Uygur Autonomous Region. It achieved an average yield of 447.47 kg of soybean per mu (0.07 hectares), reaching a new high of China's soybean output.

The new variety was developed by a team led by the Heilongjiang Academy of Agricultural Sciences. Researchers used molecular design breeding technology, hybridization as well as radiation breeding methods.

The test planting was coordinated by the Heilongjiang Academy of Agricultural Sciences, Northeast Institute of Geography and Agroecology under the CAS and other institutions. The test results showed that the new variety of soybean has high and stable yields, as well as good adaptability.

Experts from the Ministry of Science and Technology said the new soybean variety indicates that soybean breeding technology has been greatly improved in China, according to the CAS.