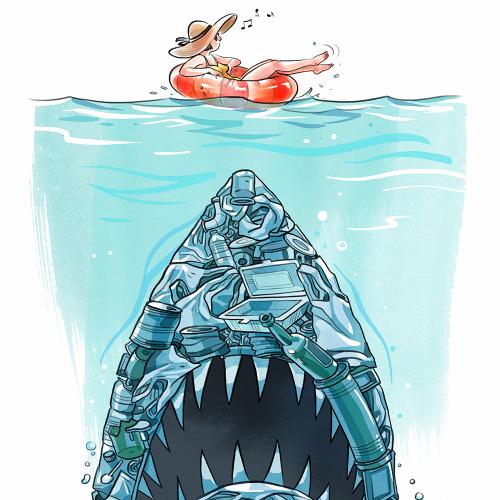 But the massive scale of production, consumption, emission and pollution, which characterized the 20th century, and which have continued in this century, do not conform to these rules, giving rise to different types of environmental pollution problems afflicting the world. Plastic pollution, which is part of that harmful pollution, choking rivers, seas and oceans, far exceeds the absorbing and purifying capability of the water bodies.

Thanks to rapid economic development, the use of plastics has increased to such an extent that we can hardly do without them today. Yet a part of the plastic waste discharged into the seas and oceans through drains and rivers is consumed by marine animals such as whales causing their deaths, or fragmented into fine particles by crashing waves or ultraviolet rays.

Plastic waste can take decades, even centuries, to dissolve completely. Recent reports show that a mass of plastic waste was found in the carcass of a whale in Asia, while microplastics were detected in dead fish, turtles and seabirds, as well as human feces. Latest studies also show that marine animals even 1,800 meters below the sea surface consume microplastics. And scientists have found that some coral reefs, too, feed on toxic plastic waste.

Action should be taken right now

Although the long-term impact of microplastics on the biosystem is yet to be fully ascertained, the toxic plastic waste marine animals consume could contaminate marine products and harm many animals in the food chain, humans included. The damage that microplastics could do to the environment is beyond imagination.

The World Economic Forum said the global plastic production, which had reached 396 million tons in 2016, a 200-fold increase from 1950, will continue to increase at a rapid pace. According to an article published in Science by Georgia University researchers in 2015, the first global data assessment and research report since the 1970s, 4.8-12.7 million tons of plastic waste out of the 275 million tons generated by 192 countries and regions with sea coasts ended up in the oceans in 2010.

The report also said the main source of plastic waste that ends up in the seas and oceans are Asian countries such as China, Indonesia, the Philippines and Vietnam. And the United States and Japan rank first and second in terms of per capita plastic waste disposal.

Given that a huge disparity exists in the data released by different institutes, China should strengthen its own scientific research to provide reliable data on plastic waste. Nonetheless, since all the data point to huge amounts of plastic litter in the oceans, all economies need to adopt effective measures to reduce the production and discharge of plastics.

Plastics are not essential to human existence. Despite the extensive use of plastics, it is totally possible to reduce their use. Yet the road of plastic recycling has been bumpy. For instance, the recovery rate of about 9 million tons of plastic waste Japan generates every year was only 14 percent, and more than half of the recovered plastic containers and packages are burned to generate electricity and supply heating.

Since recycling alone cannot solve the plastic waste problem, the key to reducing plastic pollution lies in drastically reducing the production of plastics.

A legally binding accord is needed

The international community has spared no effort in drawing attention to marine plastic pollution. The United Nations Environmental Programme proposed the Global Partnership on Marine Litter in 2003 and issued the Marine Litter: A Global Challenge, the first attempt to cover 12 time zones to measure marine litter, in 2009. And fighting marine plastic pollution was one of the themes of the G20 Summit in Osaka in June.

In fact, the Japanese government, along with the US administration, had been criticized by the international community for refusing to sign the Ocean Plastics Charter. But now that the Osaka summit's "Osaka Blue Ocean Vision" has proposed to reduce additional pollution caused by plastic litter in the seas and oceans to zero by 2050, Japan should demonstrate leadership on the issue. And as the first step taken by the G20 countries to solve the marine litter problem, the "Osaka Blue Ocean Vision" deserves praise.

But there are two problems with the proposal: One, it is not legally binding, and two, the problem has to be solved much before 2050, because 150 million tons of plastic waste is already flowing in the seas and oceans.

Worse, the amount of plastics in the ocean would equal that of fish by 2050, according to the World Wide Fund for Nature (WWF). Therefore, zero disposal of plastic waste should be achieved by drastically reducing plastic production and use, as well as recycling plastic waste by 2030. And these conditions should be binding on all countries and regions, instead of merely being set as goals on paper.

As for China, it should introduce the OECD's Extended Producer Responsibility system, which requires the producer to pay the cost of recycling, recovery and treatment of waste, including plastic waste.

Moreover, individuals should raise their awareness and reduce producing plastic waste by bringing their own shopping bags, instead of using plastics bags, minimizing the use of plastic products, and sorting garbage at source, which has already been introduced in the country.

The author is a professor at the College of Policy Science at Ritsumeikan University, and director of the Research Institute of Global 3E in Japan. The views don't necessarily represent those of China Daily.