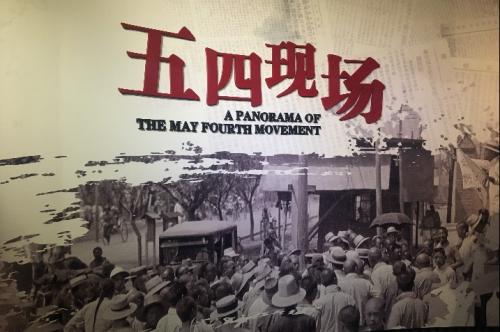 An exhibition to mark 100 years of the May Fourth Movement opens to the public in Beijing, Cheng Yuezhu reports.

The New Culture Movement Memorial of Beijing is holding an exhibition to commemorate the centenary of the May Fourth Movement, an anti-imperialist campaign in China in 1919.

With historical artifacts, publications and photographs, the exhibition entitled A Panorama of the May Fourth Movement, which opened to the public on April 23, recounts how students and workers at the time got together to demand national independence and seek reform.

On May 4, 1919, more than 3,000 students joined a demonstration in Beijing to oppose the Beiyang government's (1912-28) signing of the unequal Treaty of Versailles. Displaying 180 historical photos and 11 artifacts, the ongoing exhibition comprises five sections in chronological order, from the student demonstrations on May 4, 1919, to China refusing to sign the peace treaty with Germany in June that year.

"The newspapers and magazines at the time sympathized with the patriotic activities of the students and published illustrations advocating the upholding of national sovereignty. They rejected the treaty and criticized the Beiyang government," Qin Suyin, one of the curators, writes in the China Cultural Relics newspaper.

"Such materials are popular with visitors (at the exhibition). They give a vivid picture of the May Fourth Movement and allow people to get a sense of that era," Qin adds.

The Beijing exhibition not only displays Chinese publications at the time but also includes 18 photographs by the late US photographer Sidney D. Gamble, with support from the Duke University Libraries in the United States.

The show runs through June 9 at the exhibition's venue-the Honglou, or Red Building, at the former site of Peking University. Construction started in 1916 and was completed two years later. The building is described as the cradle of the May Fourth Movement, from where the founders and early leaders of the Communist Party of China, including Li Dazhao, Chen Duxiu and Mao Zedong, worked to disseminate Marxism and pushed forward the revolutionary campaign.

The movement also led to the reorganization of the Kuomintang.

Chen and Li founded the Weekly Review magazine in the building in 1918. It published news on the movement. Several editions of the magazine are on display at the exhibition.

According to Qin, the building witnessed the movement in its entirety.

"I believe there is no other venue that can bring the audience into the scene of the May Fourth Movement as realistically."

In 1961, the building was listed in the first batch of major national-level protected historical and cultural sites. It was turned into the New Culture Movement Memorial of Beijing and opened to the public in 2002. As a landmark of China's modern history, the building is also one of the most popular sites.

According to the memorial's administration office, the site has received more than 50,000 visitors so far this year-over four times the number of the same period last year.

The memorial saw a surge in visitor appointments after President Xi Jinping's speech about strengthening studies on the movement and its spirit.

The memorial has registered 231 appointments for May, which amounts to an estimated 10,000 visitors.

Apart from visiting the exhibition, students and other groups are also seen taking an "oath of allegiance"-to inherit the spirit of the May Fourth Movement and continue to strive for national rejuvenation-in front of the building.