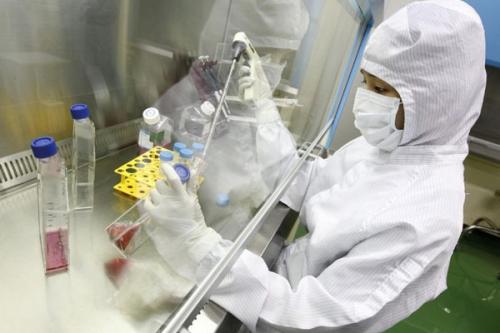 A new therapy developed by Chinese researchers to treat bone marrow cancer has completed its first phase of clinical trials with a response rate of 90 percent.

The high response rate suggests the therapy might significantly raise the five-year survival rate of patients with multiple myeloma, which currently stands at 50.7 percent.

Multiple myeloma, a cancer that develops in plasma cells and accumulates in the bone marrow, is the second most common malignant tumor in the blood system, and its incidence in China is between 1 and 2 out of 100,000, according to epidemiological investigations.

The therapy, which used a CAR-T therapy independently developed by Nanjing Legend Biotechnology Co, included 17 patients in relapsed or refractory cases for the Phase I trial that started in late 2016.

CAR-T therapy has received a lot of attention in tackling tumors, but its applications in treating this cancer are still at the trial stage, doctors said during a news briefing on Tuesday.

"T-cells are like the police force in the human body. CAR-T reinforces the cells with positioning and ballistic devices," said Mi Jianqing, director of hematology at Ruijin Hospital, and a leading expert in the trial. "When the T-cells are re-injected in the body, these cell police can precisely locate cancer cells and terminate them."

Mi said that it takes a month for a patient to receive the hospitalized treatment and doctors will do follow-up evaluations after three months, six months and a year.

He said all the 17 patients suffered from side effects, mainly manifested as cytokine release syndrome, or CRS, with main manifestations including fever, liver dysfunction and hypoxemia, but all were under control as they had prepared countermeasures beforehand.

A paper about the Phase I clinical trial was published on the website of the US-based journal Proceedings of the National Academy of Sciences on Tuesday.

Ma Ying, 64, was one of the patients who participated in the trial at Ruijin Hospital. Ma said she was diagnosed with the disease in 2011 and got better temporarily after receiving a stem cell transplant. But the disease reoccurred in 2015 and chemotherapy failed.

She described her situation as "wasted". All of her blood indicators became dangerously low. She suffered from hemorrhaging and had difficulty eating and drinking.

She joined the trial in April 2017. "Multiple evaluations showed that I became completely relieved from the illness in the past two years and now I can almost live a normal life," said Ma, a former physician from Ningbo, Zhejiang province.

Like Ma, more than 70 percent of the participants in the trial were "completely relieved from the illness" as the hematopoietic function of their bone marrow and immunologic function returned to normal, said Mi, director of hematology at Ruijin Hospital.

"Such a result is superior to similar therapies around the world," he said.

The therapy entered its Phase II clinical trial in China, which will include 60 patients and has been carried out at eight hospitals since last month, while the Phase I trial in the United States and the European Union began in August, said the research team.