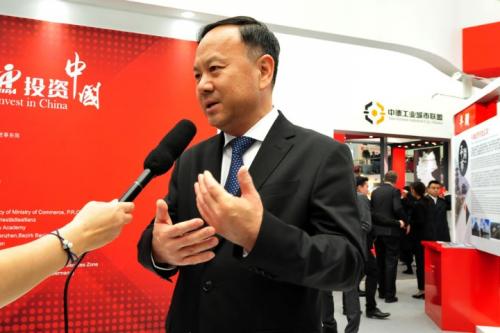 Alliance at regional level has expanded to include 43 manufacturing cities

China and Germany have further deepened cooperation at a regional level as another city signed up for the Sino-German Industrial City Alliance at this year's Hannover Messe industrial trade fair.

The alliance was formally established in Hanover in 2016 with the secretariat located at Foshan Sino-German Industrial Services Zone. Its membership has expanded from 18 founders to 43 cities, 23 from China and 20 from Germany. The newest member is the German city of Bad Homburg.

Speaking in Hanover on Monday at the alliance's seventh general meeting, Deputy Mayor of Foshan Municipal Government Zhao Hai said: "The alliance is an important platform for cooperation between China and Germany at local level. With win-win cooperation as its key concept, the alliance is a bridge to promote collaboration and exchanges between member cities in the fields of economy, trade, industry, and science and technology."

So far, more than 30 delegations from Germany, involving more than 300 businesses, have been to China, with around 600 Chinese enterprises visiting Germany in search of business opportunities and collaborations.

"With the strong support of leaders at all levels from both China and Germany, the alliance has expanded greatly for the last three years, continually growing its influence on the political and business circles of both countries to promote trade and investment," Zhao said.

In 2018, China maintained its status as Germany's largest trading partner for the third consecutive year, with bilateral trade volume worth 199.3 billion euros ($224 billion), according to the German Federal Statistical Office.

At the first China International Import Expo in Shanghai in November, Germany had 173 exhibitors, with both the number of enterprises and the exhibition area ranking first among European countries.

Wang Weidong, minister counselor in the economic and commercial office at the Chinese embassy in Germany, said: "The two-way investment between the two countries has remained vigorous and more pragmatic. Whilst Chinese investment in Germany has become more diversified, focusing equally on quality as well as quantity, the German enterprises' enthusiasm for investment in China is not diminished."

In 2018, Germany added nearly 500 investment projects in China, and its year-on-year investment grew at a rate of 138 percent.

Meinhard Matern, deputy mayor of the alliance's newest member Bad Homburg, said seeing the positive experiences of other cities made joining the alliance an exciting prospect.

"We have already had tourist relations with China as we see many Chinese visiting our city, but we want to strengthen also our economic relations between Chinese and German companies in Bad Homburg," he said.

The city of Dortmund has also been given observing member status after expressing its interest.

Pascal Leiden, vice-director of Dortmund's Economic Development Agency, said: "With this alliance, our companies will find it easier to access the support, the contact as well as the network once they go out to China to look for opportunities."