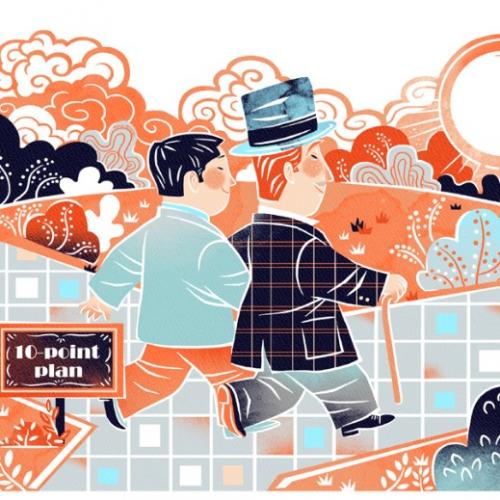 Editor's Note: The European Commission and the High Representative for Foreign Affairs and Security Policy put forward a 10-point policy package on China on March 11, which the European Union heads of state or government are reviewing at the European Council on Thursday and Friday, in order to chart the future course of EU-China relations. What does this mean for future China-EU relations? Two experts share their views on the issue with China Daily's Pan Yixuan. Excerpts follow:

The 10 action points put forward by the European Commission and the High Representative for Foreign Affairs and Security Policy Federica Mogherini suggest the EU remains, in general, ambivalent on China despite being willing to expand its trade with China. The Commission has also urged the EU member states to reach a consensus on trade and economic cooperation with a rising China.

The Commission and its High Representative aim to start a discussion on how to make the EU's approach more realistic, assertive and multifaceted in regard to not only China but also sharpen its global competitiveness and strengthen its security.

That the Commission sees China as a "cooperation partner", "negotiating partner", "economic competitor" as well as a "systemic rival" indicates, contrary to the general understanding, its readiness to build on the partnership of strategic cooperation with China. Indeed, trade and economic competition between China and the EU is intensifying, but such a competition is good for the two sides as well as the rest of the world.

Yet competition alone will not define future Sino-EU relations, because Brussels attaches great importance to its partnership with Beijing when it comes to improving the global governance mechanism.

China remains committed to peaceful development and cooperation. So if the EU continues to accord the same importance to economic cooperation with China as it has done until now, Chinese investment in Europe will grow, creating more European jobs and helping boost the EU economy. But if the EU prioritizes politics and believes China could pose a threat to its security－although China will never be a threat to any economy－Chinese investment in Europe could slow down.

The challenge for both sides therefore will be how to achieve competitive cooperation. But since Sino-EU ties have enjoyed sound momentum of growth over the years, it is expected that Beijing and Brussels will resolve their disputes in due time to not only expand two-way trade but also fight unilateralism and trade protectionism in order to further promote globalization and strengthen free trade.

Cui Hongjian, director of the department for European studies at the China Institute of International Studies

EU wants its concerns to be addressed

The 10-point policy package represents the EU's urgent concerns, which includes a rising China as well as a self-centric United States. The EU has not taken sides in the Sino-US trade disputes. Instead, it has sought to be heard and respected.

The fact that the European Commission has put forward the 10-point policy package despite China and the EU holding regular talks suggests it wants its requirements to be discussed at the China-EU Summit to be held in less than three weeks.

The US and China are the EU's two largest trade partners, while the US is also a strong security partner of the EU. And now that the US-China trade talks have entered what many consider their final stage, the EU wants to settle many of its trade issues with China so it can chart the direction for its future.

It is also likely that the European Commission put forward the policy package to prompt the EU member states to reach an agreement on China-EU relations before President Xi Jinping's visit to three European countries－Italy, France and Monaco－from Thursday to Tuesday, especially because Italian Prime Minister Giuseppe Conte has said Rome may join the Beijing-proposed Belt and Road Initiative.

The Commission might have put forward the package also to show it can make more political achievements before the European Parliament election in May, and impress the European voters with its governance prowess.

China respects the EU's reasonable concerns. But while it is up to the EU to decide what it will do in the future, China would like to convey the message that as a "cooperation partner", it is dedicated to mutual benefits and as an "economic competitor", it brings endless opportunities for the EU.