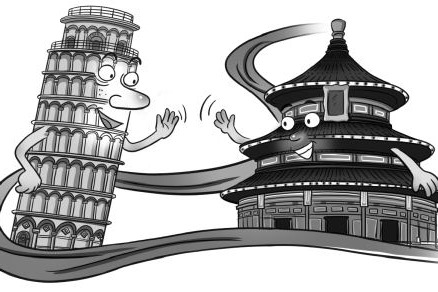 BRI a new source of growth for EU

Editor's Note: President Xi Jinping is paying a visit to Italy, Monaco and France from March 21 to 26. During his visit to Italy, Beijing and Rome are likely to sign a memorandum of cooperation under the Belt and Road Initiative despite the efforts of the United States to prevent Italy from joining the BRI. What has prompted Italy to join the initiative? And will other major European countries follow Italy's example to join the initiative? Five experts share their views on the issue with China Daily's Liu Jianna. Excerpts follow:

China has been cooperating mainly with developing countries in Asia and Africa under the Belt and Road Initiative framework. But if China and Italy were to sign a memorandum of cooperation, China would also be working with a developed economy in Southern Europe, as well as a G7 member and an important link in the ancient Silk Road, to promote the Belt and Road Initiative.

Hit by several crises including the debt and refugee crises, European countries are seeking new growth points. Confronted with development bottlenecks and a rising unemployment rate, Italy hopes to expedite its economic recovery and achieve growth by collaborating with China in the Belt and Road Initiative.

Italy's own development needs and national interests have prompted it to edge closer to China despite the US' opposition. But given there is no existing model for cooperation between China and a developed country under the BRI framework, the two sides have to work out a new collaboration model based on their respective national conditions, in order to realize win-win results. For instance, Italy's famous fashion industry could establish a win-win working relationship with China's textile industry.

In the near term, cooperation with China may help boost Italy's economy, improve Italian people's livelihoods, and stabilize the eurozone's financial situation, which will enable Rome to reduce its public debt ratio and staggering financial deficit.

In the long run, deepening collaboration under the BRI framework may expand the export of Italy's agricultural and food products, technologies, medicines, tourism, cultural and other products to China and other regions. And improving the infrastructure at Italian ports along the Mediterranean and interconnectivity between land and sea may significantly promote trade between Italy and other European countries.

Both sides must adopt pragmatic approach

European countries have been rather ambivalent when dealing with the Belt and Road Initiative. They hope to gain easier market access and acquire more capital by deepening relations with China but are reluctant to deepen cooperation with China because of ideological differences and the US' political influence on them.

Under such circumstances, Italy's open support to the BRI is indeed encouraging. In fact, more or less all European countries have benefited by cooperating with China.

Second, the existing cooperation mechanism and infrastructure connectivity between the two sides, for instance, the China-EU Connectivity Platform and the China-Europe freight train network could further facilitate cooperation under the BRI framework.

And third, China and Europe have a history of settling their disputes through consultations and negotiations, as seen in the solar panel trade, which not only protects both parties' core interests and leads to win-win cooperation but also is conducive to collaboration under the Belt and Road Initiative framework.

Italy's move, hopefully, will prompt other European countries to stop adhering to the US' divisive policies and adopt a more pragmatic approach toward China for the sake of their own economic development and national interests.

That Italy's Prime Minister Giuseppe Conte has vowed to bring the European Union's trade standards to the Belt and Road Initiative should be welcomed, as China, despite proposing the initiative, doesn't set all the standards for cooperation under the BRI framework.

Chinese leaders have repeatedly emphasized that the initiative is open and inclusive in nature, and that China welcomes all countries including the US, which strongly opposes the initiative, to participate in it and help raise it to a higher level.

The West has been criticizing the initiative's programs saying they follow low trade and environmental standards, and blaming China for all the problems, if there are any. But the fact is, China initiates the Belt and Road programs, but the standards for different programs are set after taking into consideration local laws, rules and conditions. Therefore, higher standards can be set only if all sides, especially the developed countries, participate in it.

In the future, small and medium-sized enterprises should be encouraged to play a more active role in Belt and Road projects and private capital introduced to boost the economic development of all the economies involved.

Some critics even claim that China is trying to divide Europe by establishing cooperation mechanisms with certain European countries, but such critics don't realize the simple fact that a divided Europe would cause more harm than good to the Chinese economy.

As a staunch supporter of multipolarization, China hopes to see a strong, unified Europe which will help build a more balanced world order. Therefore, it has made efforts to help accelerate the integration of Europe, by deepening its economic cooperation with European countries. After all, the integration of Europe cannot be realized unless all countries are economically strong enough.

Belt and Road open to all economies

Several factors will push European countries to adopt a more open attitude toward the Belt and Road Initiative.

A growing appetite for investment in infrastructure, which the European Commission's Investment Plan for Europe (known also as the "Juncker Plan") could not satisfy, means European countries have to find new sources of investment. And since the BRI is known to bring visible benefits to the countries involved, it is more than likely that more European countries would join it.

As a matter of fact, countries along the China-Europe freight train route have largely gained through improved infrastructure interconnectivity.

Also, given their opposition to the US' unilateral and trade protectionist policies, European countries could better promote multilateralism and globalization by participating in the BRI. The US has made every effort, though unsuccessfully, to prevent other countries from joining China-proposed initiatives such as the BRI and the Asian Infrastructure Investment Bank. But the US' efforts to prevent Italy from joining the Belt and Road Initiative will not only fail, but also harm its global competitiveness.

Let's hope Sino-Italian cooperation under the BRI framework will produce enough tangible results to prompt other European countries to resist the US' pressure and join the initiative.