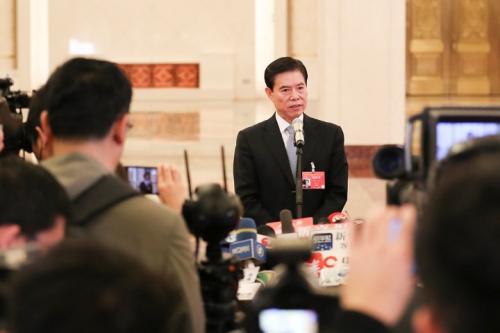 Ministers are taking questions from the media about the most pressing public issues. This is the second ministers' "passage interviews" of this year's two sessions.

Passage interviews got their name because they usually take place on walkways leading to the main hall of the Great Hall of the People before or after plenary meetings of the National People's Congress and the National Committee of the Chinese People's Political Consultative Conference.

Here are the highlights:

China's financial sector is striving to solve the financing difficulties of private enterprises and reducing their costs, said Guo Shuqing, Party secretary of the People's Bank of China and chairman of the China Banking and Insurance Regulatory Commission.

"The efforts to step up support for private enterprises are closely related to the supply-side structural reform of the financial sector. We are making adjustments in terms of financial institution, market and product systems," said Guo during an interview on Tuesday.

China will continue taking new steps in financial opening-up this year, over which Sino-US trade talks are very likely to reach a consensus, Guo added.

China and US must meet halfway: Zhong Shan

China and the United States are still in talks regarding ongoing trade issues, which require the two countries to meet halfway, Zhong Shan, China's minister of commerce, said on Tuesday.

The 90-day talks between the two countries have reached a breakthrough, said Zhong.

"The two parties agreed to extend the negotiation, and during the extension, both sides will not implement the planned tariff hike. We should cherish the hard earned achievement," he added.

Govt cuts customs clearance time by over 50% in 2018: Ni Yuefeng

China has slashed the average time for customs clearance by over half in 2018, far surpassing the government's previous goal to cut the average time by one third, according to Ni Yuefeng, head of the General Administration of Customs.

"The robust growth of China's booming cross-border e-commerce has posed challenges to customs supervision," Ni said on Tuesday, during an interview from the sidelines of the two sessions.

To meet the new challenges, Chinese customs used the artificial intelligence technologies to help ease the clearance procedures. "In the next step, we will strengthen the supervision and improve the services," Ni said.

China will accelerate efforts to develop advanced manufacturing and strengthen its innovation and competitiveness, while renovating and upgrading traditional industries, said Miao Wei, minister of industry and information technology.

To promote high-quality manufacturing development, the country will simultaneously foster and develop emerging industries and new technologies, addressing industry overcapacity and push forward the intelligent manufacturing, Miao said on the sidelines of the ongoing two sessions.

In addition, Miao said by the end of February this year, 1.56 billion mobile phones were in use in China, surpassing the total population of the country.

Authorities overseeing the market place will implement new regulations this year to more effectively impose the strictest punishment on violators found guilty of the production and selling of fake or substandard goods, Zhang Mao, minister in charge of the State Administration for Market Regulation said on Tuesday.

China will establish systems to subject such violators to more severe punishment, including hefty fines and compensation for consumers, Zhang said. Violators will have all fake or substandard products identified, confiscated and destroyed, he said.

A whistle blower system will be established to more effectively deter such violations, he added.

Both sides of Taiwan Straits will be reunified: Liu Jieyi

The two sides of the Taiwan Straits must and will be reunified, Liu Jieyi, head of the Taiwan Work Office of the Communist Party of China Central Committee and the State Council Taiwan Affairs Office, said on the sidelines of the ongoing two sessions.

Over the years, exchanges and cooperation across the Taiwan Straits have become more extensive and the bonds of affection between the two sides have deepened, he said.

"Our compatriots in Taiwan now better understand that only when the cross-Straits relations become better, will they have a better future," he said, adding that "We are increasingly capable of promoting the peaceful reunification of the country and bringing benefits to compatriots on both sides."