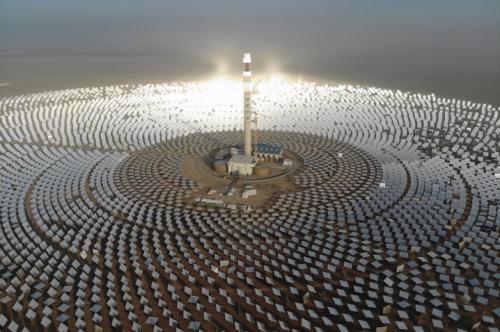 The achievement marks China's emergence as one of the few countries in the world to master the technology.

He noted that the company chose Dunhuang because the local light conditions are good, adding that "the vast Gobi Desert is suitable for building new energy power stations".

"Also, Dunhuang is an important junction on the Silk Road. Having this technology here can serve as a great example," he said.

The National Energy Administration included the power station in the first batch of solar thermal power generation demonstration projects in 2016.

Solar thermal power is one of the key new energy industries the government is supporting. According to national plans, during the 13th Five-Year Plan period (2016-20), the industry will offer 5 million kilowatts of installed capacity, which will generate more than 100 billion yuan ($14.6 billion) of market growth.

The annual power generation of the molten salt tower thermal power station will reach 390 million kilowatt-hours, which can reduce carbon dioxide emissions by 350,000 metric tons per year. That is equivalent to releasing environmental benefits from 667 hectares of forest, while creating economic benefits of 300 million to 400 million yuan at the same time.

Industry insiders said the establishment of the power station in Dunhuang is an important milestone in the development of China's solar thermal power industry. It not only optimizes Dunhuang's new energy structure, but also offers a positive demonstration of the healthy and sustainable development of the new energy industry in Gansu, and even the whole country.

"The molten salt tower thermal power station is the second solar thermal power station in which we have invested in Dunhuang. With the deepening of China's reform and opening-up, and the launch of the Belt and Road Initiative, China's solar thermal technique will go global and blossom in the world wherever developing solar power is suitable. With clean energy, China will benefit more and more people in the world," said Huang Wenbo, vice-chairman of Beijing Shouhang.

According to the company, the total reflection area of the power station's mirror field is 1.4 million square meters. When the sun shines down, the heliostat will reflect and concentrate the light on the top of the heat absorption tower, and heat the molten salt.