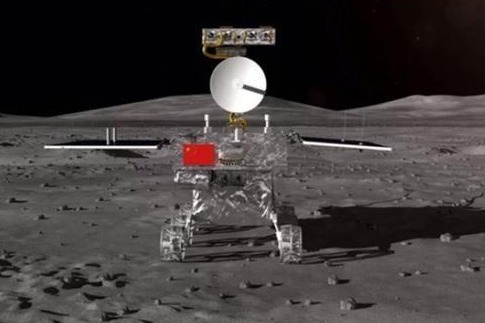 China's Chang'e 4 probe entered a planned orbit on Sunday morning to prepare for the first soft landing on the far side of the moon, the China National Space Administration announced.

The probe entered an elliptical lunar orbit, ranging from 15 kilometers above the lunar surface to about 100 km, at 8:55 am, the administration said.

Since the Chang'e 4 entered lunar orbit on Dec 12, the ground control center in Beijing has trimmed the probe's orbit twice and tested the communication link between the probe and the relay satellite Queqiao (or Magpie Bridge), which is operating in a halo orbit around the second Lagrangian (L2) point－a point of equilibrium－of the Earthmoon system.

The space engineers also checked the imaging instruments and range detectors on the probe to prepare for the landing.

The control center will choose the precise time to land the probe, the administration said.

The Chang'e 4 probe, including a lander and a rover, was launched by a Long March-3B carrier rocket on Dec 8 from the Xichang Satellite Launch Center in Sichuan province.

Since the moon's orbital cycle around Earth is the same as its rotation cycle, the same side always faces Earth.

The far side, most of which cannot be seen from Earth, has traditionally been called the "dark side" of the moon, even though it is not always dark. Most of it is uncharted, however.

The Chang'e 4 mission will be a key step in revealing the moon's mysterious side.

The scientific tasks of the Chang'e-4 mission include low-frequency radio astronomical observation, surveying the terrain and landforms, detecting the mineral composition and shallow lunar surface structure and measuring the neutron radiation and neutral atoms to study the environment.

China has promoted international cooperation in its lunar exploration program, with four scientific payloads of the Chang'e 4 mission developed by scientists from the Netherlands, Germany, Sweden and Saudi Arabia.