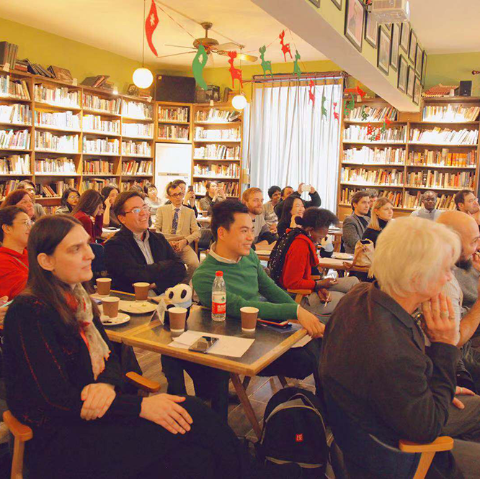 As China celebrates the 40th anniversary of the reform and opening-up, China Daily website invited over 30 foreigners to share their stories and insights in Beijing on Wednesday.

Laurence Brahm, an American expat who first came to China as a university exchange student in 1981, related his China story to the Eagles song Hotel California. "China is like Hotel California -- you can check out, but you can never leave."

Laurence Brahm has spent much of the 37 years living and working in the country. He has been a lawyer, a writer and a filmmaker, and now he is the founding director of the Himalayan Consensus and a senior international fellow at the Center for China and Globalization.

Reflecting back on the first days when he just arrived, Laurence said he felt like an alien. "People stared at me wherever I went. And that was a society with absolute scarcity."

"And now we are sitting at the Bookworm, and there are books around us. China is now connected to the world, leading on quantum communications and quantum satellites and artificial intelligence. The transition is huge," Brahm said.

Alex Chen, a 27-year-old Chinese-Italian, left China for Italy at the age of 6 to be with his parents. Since then he has returned many times to visit his grandparents. "Every time I would see radical economic and social changes, which have improved people’s lives, but never as intense as this time," he said.

Bruce Connolly, a 70-year-old photographer from Scotland, has noticed the widespread availability of smartphone technology and the changes it brought to people's lifestyles, too.

However, as a travel enthusiast who has left footprints all across the country, Connolly was most impressed by the infrastructure changes "So many changes I have seen over 31 years and still continue to see each day reveal a China that’s almost unrecognizable to what I saw on a leisurely rail journey of discovery in 1987."

But there's more to China than the ever-improving infrastructure and widespread mobile payment.

"The presence of foreigners, mainly journalists, in China shows that China is opening its door wider to the outside world," said Hujjatullah Zia, an Afghan journalist and freelance writer. Zia attended a 10-month media exchange program along with 44 journalists from 43 Asian, Pacific and African countries.

During the stay, Zia said he had witnessed that China is providing a platform for dialogue, cultural exchanges and people-to-people contact on a large scale to minimize misunderstandings, seek common ground, and strengthen friendly relations and mutual understanding.

Gilbert Van Kerckhove is one of the earliest foreign business people to venture into China after its reform and opening-up. The 70-year-old Belgian business strategist has not only witnessed, but also played an important part in the country's tremendous transformation over the decades.

In 2008, as Beijing prepared for the Olympic Games, Van Kerckhove acted as a coordinator between the Chinese administration and foreign governments, embassies and chambers of commerce.

Looking back on his memorable experiences of the 2008 Olympics, Van Kerckhove summarized the whole complicated effort in one sentence: "It was not only me -- it was teamwork. It also illustrates that we foreigners can contribute to this country."

Living in China for 38 years, Gilbert Van Kerckhove witnessed China’s great transformation. "In this respect, China has being pretty much planning ahead and being very forward-looking," he said.

Due to his great achievements, he was honored with the China Friendship Award in 2005, and he was offered a Chinese "green card" in 2008.

Jocelyn Eikenburg, an editor with China Daily who is originally from the US, first came to China in 1999 and has lived in the country for over a decade. In her speech, she shared her romantic story with her Chinese husband to the audiences, discussing reform in the country’s marriage laws that now "empowers individuals to follow their hearts in one of the most important life decisions a person can make. This kind of freedom, a critical aspect of China's reform and opening-up, has helped transform the country into a more humane place to live. It means China can better fulfill its promise to serve the people".

David Bartosch from Beijing Foreign Studies University analyzed the meaning of 40 years of China's opening-up policy from the perspective of philosophy and world history.

"China is one of the very few fully sedentary civilizations of pre-modern times," David said, comparing the economies of China with those of Western Eurasian civilizations. He said the latter had a rather "half-nomadic" character.

"In contrast, China developed a peaceful way of self-organization throughout most of its unoccupied phases in history." David said this wisdom of peaceful development and self-organization, of sharing and fruitful coexistence is what is needed to provide the children of this Earth with a livable future.