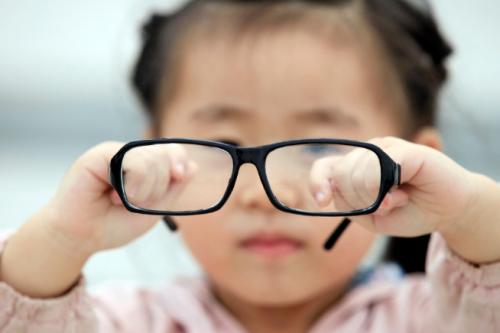 Chinese AI gives nearsighted children a glimpse of the future

If you are concerned that your child will be nearsighted, a new artificial intelligence model developed from millions of eyesight records could help predict whether your offspring will need glasses.

Myopia is the most common visual impairment in children, and China has an unprecedented rate of nearsightedness. A recent World Health Organization report showed that about 600 million Chinese, almost half the population, are nearsighted, including more than 70 percent of high school and college students, and 40 percent of primary school children.

Current approaches to curbing vision loss include eyedrops, glasses, contact lenses and surgery. However, while these can be effective, they have side effects, such as higher rates of recurrence, eye infections and other ailments.

If nearsightedness could be predicted, medical professionals could intervene with appropriate treatments to help reduce the risk of high myopia, which is measured by a focusing power of－6 diopters, a measurement of the optical power of a lens, and higher.

After analyzing 1.25 million eyesight records over three years, researchers from Zhongshan Ophthalmic Center at Sun Yat-sen University in Guangdong province have identified myopia development rules, and built an AI model to predict the condition in children and teenagers.

The study, published in the international journal PLOS Medicine, involved children ages 5 to 18 who had eyesight checks from 2005 to 2015 in eight of the largest ophthalmic centers in the southern province.

The researchers discovered that nearsightedness usually occurs at age 7, and rapidly develops before age 10. It can grow to－3 diopters during the teenage years and up to－6 diopters in the 20s.

There were few cases of high myopia among school-age children, and researchers did not find the onset or development age of high myopia.

The researchers used age, the diopter and annual myopia progression rates as the main variables to develop an algorithm to predict degrees of myopia over 10 years and the possibility of high myopia before 18 years.

The diagnostic accuracy was 90 percent within three years, and 80 percent within 10 years. It can also predict high myopia eight years in advance, providing a scientific basis for intervention, study leader Liu Yizhi said.

The research team recently made the AI model public and demonstrated how it works by using the case of a 5-year-old boy who was nearsighted and began wearing glasses at-1 diopter last year.

A researcher inputted two myopia records taken at least 12 months apart, and within seconds the model showed that the boy's diopters might reach-3 after 10 years, but he had little risk of high myopia.

High myopia usually progresses rapidly, and can cause blindness or other severe eye conditions, said Lin Haotian, the lead author of the study. The condition can also be associated with genetics.

The risk of children developing high myopia is a great concern for Chinese parents, with thousands of students seeking care at hospitals and ophthalmic clinics during school holidays.

The rise in myopia is partly driven by children spending more time reading, studying, or glued to computer and smartphone screens.

Research indicates that an effective way of curbing worsening myopia is to spend more time outdoors.

"Studies have proved that if children have an additional 40 minutes outside every day, the myopia rate will fall by 23 percent in three years," Liu said.

The AI model could also help combat the limited number of specialists. By the end of 2014, China had just 36,000 ophthalmologists, with 70 percent of them working in big cities.

Many spend most of their time treating severe eye conditions, but little on the prevention and control of myopia.

"The AI model will help ease the workload for ophthalmologists and improve diagnostic accuracy," Liu said.

Last year, Liu's team and researchers from other universities unveiled an AI system that diagnoses cataracts with a high degree of accuracy.

The myopia prediction model will be put into clinical use soon.