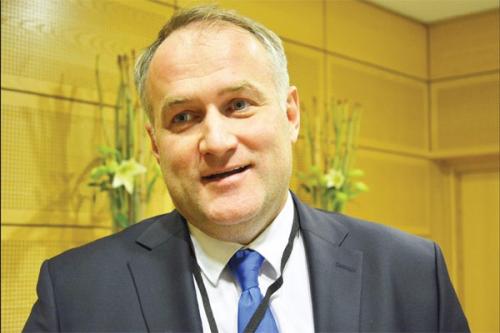 Expanded rail bridge in the 'pipeline'

Russia and its partners want to widen their Eurasian bridge with a "pipeline for trains", according to Alexey Grom, president of pan-Eurasian railway company United Transport and Logistics Co Eurasian Railway Alliance.

"Railway is one of the main tools to bring us closer in Eurasia. The areas where the rail is developing, the life is developing, and our people start to live better," says Grom.

"I'm always looking for new developments. This is the best time for this industry. And I'm optimistic that railway has a key role to play in connecting companies, countries and people," he says.

Grom, who is Russian, has worked for 25 years in the rail transportation industry. He is an enthusiastic proponent of initiatives aiming to boost Eurasian connectivity, particularly projects to unleash railway's potential.

"I like all the initiatives which help us get close to each other, because we understand that development benefits all the countries and people who live on this new Silk Road," Grom says.

"And we support these initiatives, not only in words, but also in practice. Our so-called railway bridge between South Asia, China and Europe is developing very fast. We are creating the so-called pipeline for trains at our Eurasian economic area," he adds.

"We have up to 15 trains a day between China and Europe. In five days, you can get your cargo from the Chinese border to the European border, despite the 5,430-kilometer distance. This route is safe, reliable and fast," says Grom.

Earlier this month, UTLC ERA sent two trains with containers to Chengdu, Sichuan province. The containers had originally been sent by sea from Rotterdam, Netherlands, arriving at the Russian port of Kaliningrad. The launch of these pilot trains was part of the company's multimodal transportation development project, which aims to boost Europe-China transportation through Russian ports.

Grom says UTLC ERA's target is to hit a handling capacity of 1 million containers by 2025.

By the end of October, the volume of freight traffic operated by UTLC ERA had reached a record 214,000 twenty-foot equivalent units (one TEU is equivalent to a standard 20-foot shipping container), which is 38,000 more than the total amount last year.

"It is developing. Like three years ago, nobody believed it could develop so fast. But now we see from the real figures that capacity within European borders has increased a lot in the past two years. The number of railway trains between China and Europe is increasing a lot. We see more and more European companies and countries are involved in this process. This is our common Eurasia future," Grom says.

Although there are 25 shipment points and destination terminals that already cover major European countries, and about the same number of terminals in China, UTLC ERA is looking for alternative transit routes in Europe and opportunities to expand their services to other such Asian countries as Japan, South Korea and Vietnam.

Last month in Shenzhen, Grom presented the Eurasian Rail Alliance Index at the 13th China International Logistics and Transportation Fair. ERAI is a composite index of the cost of transit container shipments in the Eurasian rail corridor across the territory of the Eurasian Economic Union between China and the EU.

He emphasizes that rail transit traffic through the East-West transportation corridor has become competitive, thanks to high delivery speed and optimal rates for freight transit services.

"If you ask me what is the future of trains - freight or passenger - I would say it is very reasonable to have combined trains," Grom says.

"I think it is a good idea to have fast-speed trains from China to Europe and vice versa, as it will bring perspectives for many industries in our common Eurasia. I also think it's a good idea to use the tracks for our railway which we are creating in Eurasia both for passenger trains and container trains," he adds.

There are already some promising projects under construction in Russia, with both China and Europe involved, which aim to provide new technology trains that could combine passengers and freight in one train, Grom says.

The 770-km-long Moscow-Kazan high-speed rail line is one example. It is expected to serve approximately 10.5 million passengers in its initial year of operation. The line's passenger and freight rolling stock will be jointly developed by Russian Railways, China Railway, Sinara and China Railway Rolling Stock.

Russia and China are currently building the Tongjiang-Russia Railway Bridge across the Heilongjiang River, known as the Amur River in Russia, which links the city of Tongjiang in northeast China's Heilongjiang province with Nizhneleninskoye, Russia.

The Chinese part of this first cross-river railway bridge between the two countries was completed in mid-October. The bridge, which uses a set of rails that can adapt to Russia's 1,520-mm and China's 1,435-mm track gauges, is expected to become a new international channel connecting China, Russia and Europe.

There is currently only direct freight rail service linking China and Europe. However, Belgium and China are working on a program to launch a passenger train line between Europe and China. The so-called Diamond Silk Road is to connect Antwerp and Shanghai by a passenger train running through 10 other cities including Brussels, Moscow, Ulaanbaatar in Mongolia and Beijing.

"If you ask me which is more important, passenger or cargo, I would definitely say passengers. Cargo is transited for the benefits of these passengers from these countries. These railway projects will boost connectivity not only in infrastructure but also in people-to-people communication," he says.

In Grom's mind, Eurasia is a region with unique advantages regarding competitiveness and connectivity. Due to booming trade along the new Silk Road, businesses and people in the region should establish relations on a personal level, he says.

"On the one hand, we are so different. But on the other hand, this difference between us has encouraged us to be connected even more. And it will offer opportunities for us - we are all neighbors - to know and learn about each other," he says.

In addition, Grom says: "We are all in one supply chain. It's very important to synchronize our developments. There is no value if someone will be ahead in this race.

"We all have to be winners. What I call 'win' is that we are playing on one team. To be the winners is to have us all involved, unite our efforts and work together for our common Eurasian future."