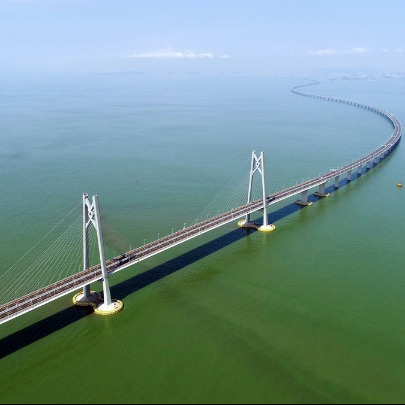 By Kathy Zhang and He Shusi in Zhuhai, Guangdong | chinadaily.com.cn

ZHUHAI – President Xi Jinping announced the opening of the Hong Kong-Zhuhai-Macao Bridge at an opening ceremony in the city of Zhuhai, Guangdong Province, on Tuesday morning.

More than 800 people attended the ceremony including representatives of the roughly 50,000 construction workers, engineers and designers from the Chinese mainland and Hong Kong and Macao SARs who built the bridge.

The top officials from Hong Kong, Guangdong, and Macao welcomed the opening of the bridge in their speeches at the ceremony.

They cited the bridge as an achievement that opens a new chapter for Guangdong, Hong Kong and Macao to consolidate their strengths and make new contributions to the nation's development. They vowed to strengthen cooperation under the framework of the Guangdong-Hong Kong-Macao Greater Bay Area.

With better infrastructure links with the mainland and Macao, Hong Kong will be placed more advantageously to explore mutually beneficial development opportunities with other players in the Greater Bay Area, she said.

Hong Kong has also made long-term plans to develop its Lantau Island, where the Hong Kong port of the HZMB and the Hong Kong International Airport are both located, into a double gateway linking the vibrant Greater Bay Area with the rest of the world, Lam pointed out.

Lam said the bridge will also add to the appeal of Hong Kong and the Greater Bay Area. People in the region will find the "one-hour living circle" within reach, while businesses will receive a boost with greater ease in the flow of goods, information, capital and talent.

Li Xi, the Party secretary of Guangdong province, said the opening marked a milestone for Guangdong-Hong Kong-Macao cooperation in a new era.

He said the opening of the bridge signifies the realization of a shared aspiration for people in the three places. It is the result of innovative collaboration in the region, and boosts confidence with its high quality and various breakthroughs.

The bridge will significantly shorten the travelling time among the three places. It will also bring people and the communities closer, Li noted.

Guangdong will seize the opportunity and make full use of the transport infrastructure, to enhance collaboration with Hong Kong and Macao, and strive to bring benefits for people by seeking coordinated development in the region.

Macao Chief Executive Fernando Chui Sai-on said the bridge enriched the practice of "one country, two systems". It is the first large-scale cross-sea bridge project jointly carried out by Guangdong and the two SARs, having overcome numerous technical and policy challenges.

Thanks to the bridge, Guangdong, Hong Kong and Macao will be linked by road for the first time. It establishes a solid basis for greater integration of the three places, Chui said.

An Baijie contributed to the story.