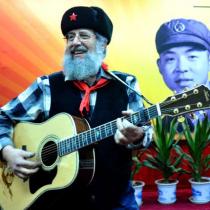 Telling China story to the world

In a classroom at Beijing's Minzu University of China, the digital screen displayed pictures of bilingual signposts as the English teacher encouraged his students to pick out the properly translated signs from the collection. The sound of English discussions interspersed with laughter filled the classroom.

The teacher was Mark Levine, an American professor with the university's English department. He has been awarded with the Great Wall Friendship Award, the highest honor for expats working in China. In addition to teaching, he often is introduced as a musician, writer, and avid traveler. But the spirited 70-year-old Californian would tell you that all these roles can be boiled down to one identity – storyteller.

Since he first came to China in 2005, he has visited 28 provinces and autonomous regions in China. Wherever he goes, Levine is constantly observing and documenting the changes taking place in China. Over the years, he has built quite a collection of articles and songs, depicting the evolution of the country’s economy, technology and the lifestyle of its people.

"Every day you would wake up in the morning and suddenly here's a building that six months ago didn't exist and the building is now there," Levine said, recalling his perception of Huai'an, the first stop of his China journey in 2005 that turned out to be 10 years long, and still counting. "I went back in 2016.And the city had changed dramatically. The government is moving out of the center of the city, so there's more places for sports arenas, bicycle paths."

"Changes are everywhere," Levine said, referring to the changes in lifestyle he has seen in the countryside. "People’s incomes have increased and their confidence has increased."

While the rapidly changing landscape is a big attraction to Levine, the writer’s biggest interest lies in the people who crossed paths with him during his journey.

His observations and interactions with the locals allowed him to pick up on changes that are less obvious than the newly sprouted buildings and express trains – the thinking of Chinese people.

A frequent coffee buyer using mobile payment, Mark also noted, "People are beginning to feel and exude a much greater pride in China's role in technological events and innovation."

He said that Chinese people are not his audience in mind. "The purpose of my songs and stories is really primarily for non-Chinese people who are not familiar with China, to give them a picture of some aspects of China," he said.

A very important aspect of China today, is the Belt and Road Initiative, Levine said.

As a sociologist and former volunteer with unprivileged people, Levine said he thinks that to a great extent, a lot of political problems in the world often stem from economic problems. And the significance of the Belt and Road Initiative is that it is aimed at sharing China’s experience of poverty alleviation with others who want to participate and to help elevate their economic position.

As the 40th anniversary of the reform and opening-up is coming up, Mark said he wants to send his best wishes to all his Chinese friends: "Keep going. Be proud of what you've accomplished, and realize there's much more to be done."

As for his plan for the next stage of his life in China, the Chinese "green card" holder is working to update his book that was published in 2004, and one chapter will be about China and the world.

"China's status in the world has changed in a wide variety of fields, not just economics but environment, international relations. And that's just going to continue," he said.