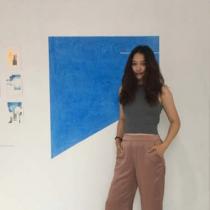 About three years ago, New York-based Chinese artist Ma Tingying came across a video in which German composer Karlheinz Stockhausen gives a lecture on electronic music.

Intrigued by his use of bombastic language, she watched the entire clip and ended up being inspired to create a theater production which features no actors, but a multichannel sound installation composed solely of human voices and a live, improvised performance by a children's marching band.

Titled Future Host, this new media theater performance - it is written and directed by Ma - was shown at the Knockdown Center in New York from Jan 20 to 22, 2017. It was also a part of the TPAM Performing Arts Festival in Yokohama, one of the most influential platforms for contemporary performing arts in Asia, which took place on Feb 13 and 14 last year.

This September, Ma's unique performance will be staged at the Ullens Center for Contemporary Art (UCCA) in Beijing on Sept 8 and 9, and the Shanghai Ming Contemporary Art Museum (MCAM) on Sept 15 and 16.

Another unique element in this daring musical experiment is that audience members can roam freely during the performance.

"I've always been interested in the exploration of space," Ma says. In her creation of Future Host, Ma says she has finally come to realize that theater could exist among the audience.

"With our collaborators, we are really trying to do something that's hardly, if not never, been done before, which is to apply the most cutting-edge concepts and techniques of spatialization, which have evolved a great deal since Stockhausen's time, to an unconventional dramatic text, in order to map out our vision of the modern cosmos," Ma says.

Born in Chengdu, Sichuan province, Ma left her hometown when she was 18 to pursue her theater interest. She received a Bachelor of Arts from the Central Academy of Drama in Beijing and a Masters of Fine Arts in playwriting from Columbia University.

She wrote and directed the thesis production S/K about a horse caught in an ancient Sichuan brocade loom, which was shown at the Signature Theatre on Broadway. She has also been doing choreography work, such as for the studies series about qigong. But she has never brought any of her work to Chinese audiences.

Ma had written the Chinese script of Future Host in early 2016.

"The feeling of homelessness, of being unable to settle into a postmodern life overabundant with meaning is the symptom of our generation," Ma says. "I hope to emphasize the importance of togetherness through collective experience."

At Knockdown Center, Ma and the crew worked with a children's string quartet and recorded the live performance. The Yokohama touring version incorporated these recordings into the sound installation at Kawabata hall. Performers from the wind ensemble of Jingshan Yuanyang School in Beijing and the High School Affiliated to Fudan University in Shanghai will also feature in the upcoming performances in Beijing and Shanghai.

"Improvisation is really a game for the brave ones. It will help the young musicians to have a real presence as thinking and listening bodies," Ma says.

New York-based composer and sound artist Chatori Shimizu, who had worked with Ma in 2015, is the conductor of Future Host.

"One of the challenges is to realize the musical aspect of Spencer's ideas without extinguishing his voice, and to merge the idea with Ma's choreography," the conductor says.

Meanwhile, sound engineer Gus Callahan helped set up and tune the 8-channel sound system with Daniel Neumann when the piece was performed at the Knockdown Center in New York. Callahan has worked on a number of spatial sound operas in the past that translate well into this particular project.

"My understanding of the work is still in flux. The contrast between experiencing the show once to editing the entire piece with a translated script a year later is immense. They feel like different worlds - I look forward to hearing the work again in China, from a more informed engineering perspective," Callahan says.

"Artistic translation across mediums can be challenging, more so than the typical difficulties of the language barrier - to make a line of text sound more sacred, or have someone speaking as if they are in the sky, all while maintaining a sense of realism. These abstract goals usually don't have clear solutions, but are more interesting and challenging to realize," he adds.