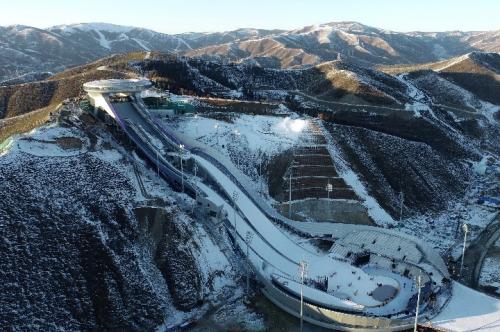 Opening the door on the Games

With one year to go until the 2022 Winter Olympics open in Beijing, the start of operations at all 12 competition venues has laid a solid foundation for the Games to live up to the highest standards.

Despite uncertainties caused by the COVID-19 pandemic, Beijing's preparations are continuing along their world-class trajectory in terms of facilities and course conditions.

Downtown Beijing will host all ice sports, with the majority of the snow events staged in the capital's northwest Yanqing district and co-host city Zhangjiakou, Hebei province, from Feb 4-20 next year.

All five ice sports competition venues in downtown Beijing have been completed, with ice-making trials now up and running.

The other seven venues for the snow events－scattered across downtown, Yanqing and Zhangjiakou's mountainous Chongli district－are in the process of having their competition courses groomed to host some of the Chinese national teams' training programs.

As the only newly built ice venue in the downtown zone, the National Speed Skating Oval, known as the "Ice Ribbon" due to its eye-catching exterior lighting beams, has given the world a glimpse into the future of the Olympics, with organizers describing the track as one of the world's fastest thanks to the use of advanced designs and technologies.

Featuring the largest ice surface in Asia, at 12,000 square meters, the oval is the first Olympic speed skating venue to make ice with an environmentally friendly cooling system that involves the use of carbon dioxide as a refrigerant, instead of the harmful substance Freon.

The new system will allow skaters to push their speed to the limits thanks the ice's consistent surface temperature and density.

"It's still up to the athletes whether this track is fast enough, but it feels good. It's pretty flat and smooth, a bit soft maybe but pretty good for the sprinters," Wang, the bronze medalist in women's 500m at the 2010 Vancouver Games, said after a test run last month.

Beijing's infrastructural readiness is also reflected in the high standards adopted by venue owners and organizers to prepare the training facilities.

As one of the training venues for ice hockey in 2022, the Wukesong Ice Sports Center has taken shape next to the iconic Wukesong Arena, while impressing international experts with conditions considered to be on a par with the competition rink in the main building.

"The ice rink is a beautiful practice facility ... the athletes will enjoy training in this facility very much," American ice-making technician Nelson Don Moffatt said after inspecting the rink last month.

"Normally the training venues are not as nice as this. They were just a very plain arena. And this is just bright and beautiful and big, which is so impressive," said Moffatt, who is serving at his fourth Winter Olympics after being hired by Beijing 2022 as the chief ice maker for all hockey competitions.

Constructed with recycled materials and powered by renewable energy, the training center also stands out as a model of energy efficiency. Post-Games plans for the building to host competitions and leisure activities align with local organizers' vision of making the Games green and sustainable.

With the pandemic forcing official test events to be canceled or delayed, Beijing 2022 venue operators remain busy keeping all the facilities maintained, while also keeping winter sports international federations up to date on the adapted sports testing activities.

Zhao Wei, secretary-general of the operational team of the Shougang Big Air ramp in Beijing, stressed that it's critical for team building and training in the absence of competitions during the pandemic.

"With the test events pulled back, we consider working at the venue without any sporting action going on as an advantage in the sense of buying us some extra time to perfect organizational plans, becoming more familiar with the sport and training staff with professional expertise," Zhao said at the venue operation office inside west Beijing's Shougang Industrial Park.

The towering ramp is the world's first permanent venue for the Big Air disciplines of freestyle skiing and snowboarding and the only snow event facility in Beijing's downtown zone.

It's hoped the venue's city location can help it tap into big air's target urban audience, with the sport's global governing body and the International Olympic Committee pushing to make the Games more appealing to young people.