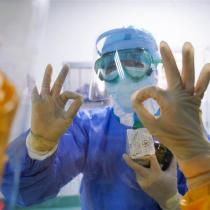 Nation's fight against virus gets backing

Major international financial institutions said on Monday that they support China's policies to restore economic activities and are confident in the country's economic resilience, despite its current challenges brought by the outbreak of the novel coronavirus.

Economists said the world's second-largest economy should take more focused and targeted actions to bail out the most seriously hit sectors and enterprises and offset the economic shocks caused by the pneumonia-causing epidemic.

The International Monetary Fund said on Monday that it supports China's efforts to contain the coronavirus outbreak and is confident that the country's economy is resilient.

"We support China's efforts to respond by taking measures with all the strength of its health system, but also by the recent fiscal, monetary and financial actions. We are confident in the resilience of China's economy," said IMF Managing Director Kristalina Georgieva.

"China has taken very dramatic actions to restrict the spread of the virus, and work is underway on a vaccine. So let's say for this quarter there will very likely be a negative impact. What would happen beyond this quarter we must observe and assess," Georgieva said.

In a posting on social media, the World Bank expressed on Monday "sympathies to all affected by the serious situation related to the coronavirus". The Chinese authorities have the policy space to act and they have announced major liquidity injection, which should help mitigate the costs to economic growth, said Martin Raiser, the bank's country director for China.

"We are also monitoring the wider economic and social impacts of this crisis," the statement said. "We support China's efforts to respond, including its efforts to maintain resilience in its economy."

Some Chinese economists predicted that if control measures for the disease are implemented seriously, in the best scenario, the economy would improve starting from the second quarter.

"The epidemic can have very negative impacts on the economy in the short term, but after the epidemic is controlled, the economy will gradually recover," said Zhang Bin, a researcher at the Institute of World Economics and Politics of the Chinese Academy of Social Sciences.

The Standing Committee of the Political Bureau of the Communist Party of China Central Committee held a meeting on Monday to make arrangements to stabilize the economy and offset the impact of the outbreak. The country's top leadership agreed that the economic conditions should be closely monitored and financial support should be strengthened.

The People's Bank of China, the central bank, injected 500 billion yuan ($71.5 billion) of funds into the financial system on Tuesday, following its injection of 1.2 trillion yuan via purchasing securities from financial institutions in the so-called reverse repo the previous day.

The unexpected coronavirus epidemic will have a "temporary impact" on China's economy, and the country's sound economic fundamentals for long-term growth remain unchanged, said Lian Weiliang, deputy chief of the National Development and Reform Commission.

The country's economic strength, resources and abilities to deal with emergencies have been significantly ramped up since the 2003 SARS outbreak, Lian said at a news conference on Monday.

Fiscal policy should also be made more proactive, with measures such as raising the budget deficit ratio and cutting taxes, among others, to help companies survive, she said.

Despite the impact of the outbreak on the Chinese economy, the long-term development momentum of the world's second-largest economy remains unchanged, said a research note from international financial group UBS.

Zhang, from the Chinese Academy of Social Sciences, also warned that the epidemic will seriously affect some special groups of people and sectors, and the government should take more focused and targeted measures to help them survive.

"Many service enterprises, for example, may register negative growth in the first quarter," he said, adding that the government should cut taxes and provide subsidies to those enterprises to ensure they can survive the difficulties.

Chen Jia contributed to this story.