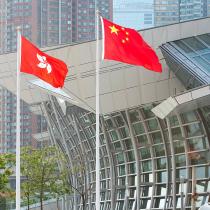 HK people urged to unite to shut off violence, chaos

The situation in the Hong Kong Special Administrative Region has reached a severe point that draws concern over Hong Kong's future, said Yang Guang, a spokesman for the Hong Kong and Macao Affairs Office of the State Council.

Yang, speaking on Tuesday, called on Hong Kong people to unite in order to halt the violence and chaos and bring back order.

"The fate of Hong Kong will be decided by all Chinese people, including Hong Kong compatriots," said the spokesman for the country's top Hong Kong affairs authority in a news conference in Beijing.

"The radical protests that have continued for nearly two months are extremely serious in nature and have had very bad consequences. They have severely affected Hong Kong's prosperity and stability, pushing it into a dangerous abyss," Yang said.

During the protests, 461 people have been injured, including 139 police officers. A strike staged by protesters on Monday resulted in some 250 flights being canceled and service on eight subway lines being suspended for more than five hours, he said.

Last month, protesters smeared paint on China's national emblem. On Saturday, they removed the national flag from a flagpole and threw it into the harbor, an action they repeated on Monday. The flags have been recovered and raised.

"This is the crucial moment for us to stand firm and guard our beautiful homeland," said Yang, calling on Hong Kong residents to think calmly about who will suffer if the situation turns irremediable.

He reiterated the need for respect for Hong Kong police for their "resolute and just law enforcement" and said they have "the strong support of all Chinese".

Yang said all who participated in violent and criminal activities will be held accountable in accordance with the law. "Don't ever misjudge the situation and mistake our restraint for weakness," he said in a warning to criminals.

"Don't ever underestimate the resolve and strength of the central government and the Chinese people to maintain Hong Kong's prosperity and safeguard the fundamental interests of the nation," he added.

"The central government has unswerving support for Chief Executive Carrie Lam Cheng Yuet-ngor. The opposition's attempt to force her to resign is doomed to fail," Yang said.

"We believe the HKSAR government and the Hong Kong police are fully capable of punishing violent crimes in accordance with the law and restoring social order," he said.

"In the Hong Kong's current chaos, those who stand at the front are a small number of violent radicals; in the middle are some citizens who have been misguided to join."

"Anti-China forces inside and outside the city who have been trying to mess up Hong Kong are the behind-the-scenes masterminds who have bolstered illegal activities," Yang said.

"They have openly emboldened violent radicals, directed and funded them. They have called black white and played up fallacies, attempting to drag all Hong Kong residents into political wrangling.

"Since February, some Western politicians and Taiwan authorities have openly made a lot of irresponsible remarks to support the protesters and interfere in Hong Kong's affairs," Yang said.

They included United States House of Representatives Speaker Nancy Pelosi, who called the large demonstrations in Hong Kong "a beautiful sight to behold".

In response, the spokesperson for the Office of the Commissioner of China's Foreign Ministry in the HKSAR on Tuesday urged US politicians including Pelosi to stop openly supporting violent opponents of the law and interfering in China's internal affairs.

Foreign Ministry spokeswoman Hua Chunying said on Tuesday that any attempt to create chaos and undermine Hong Kong's prosperity and stability will be resolutely opposed by all the Chinese people, including Hong Kong compatriots.

The Democratic Alliance for the Betterment and Progress of Hong Kong, the largest political party in Hong Kong's Legislative Council, said in a statement that defending the rule of law is the only way to resolve current political disputes and stop the violence.

The alliance also called on the people of Hong Kong to speak up against violence and join the efforts to keep Hong Kong a safe place.

Lau Siu-kai, vice-president of China's leading Hong Kong affairs think tank, the Chinese Association of Hong Kong and Macao Studies, said that the priority mission is to curb violence and restore social order. Without the rule of law, the government would not be able to deliver effective governance and improve economic and livelihood issues to ease social tensions, he added.

The Hong Kong General Chamber of Commerce, one of the city's most international business organizations, said in a statement on Tuesday that the escalating violence has not only affected Hong Kong's reputation as an international financial center but also the small and medium-size enterprises, and most importantly has undermined the safety and livelihood of ordinary Hong Kong people.