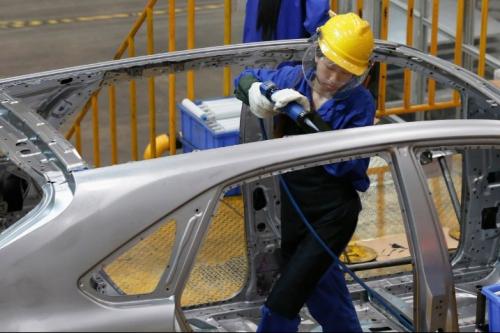 On Nov 15, the National Development and Reform Commission released a slew of policies aimed at easing private enterprises' woes in raising finance through bonds. One of the headline measures was to support qualified private enterprises in issuing high-quality corporate bonds.

Such bonds are characterized by streamlined issuance procedures. Their issuers are required to use the proceeds on projects involved in economic restructuring.

The electric vehicles maker intends to use the bonds to ease the pressure of raising mid- and long-term capital, Wang Jing, director of the fund management center at BYD, told China Economic Herald.

Such NDRC-approved bonds were issued by only eight State-owned enterprises for 171 billion yuan in all in the past.

Wang Tingting, an associate professor with the Central University of Finance and Economics, considered the NDRC's statement important. For, typically, the NDRC regulates only bonds issued by State-owned enterprises and subsidiaries of the central governments. Private-sector corporate bonds have been mainly regulated by the China Securities Regulatory Commission.

"The commission should be flexible and proceed gradually to control risks," said Tang Yao, an associate professor with the Guanghua School of Management at Peking University.

With such mechanisms, the market would be able to price these bonds appropriately, and thus become capable of accommodating bond issuances by private enterprises with lower credit ratings, Tang said.

"There are always defaults in a market economy, but well-developed bond markets can price them and deal with them efficiently, " he said.

The NDRC's Nov 15 announcement came after a number of financial authorities had promised to provide more financial support to the private sector.

In China, the private sector accounts for more than 60 percent of the national economy but only 25 percent of the banking system's outstanding loans, official data showed.

The commission said it will encourage issuances of a special type of corporate bond to raise money for venture capital funds, without limitations on the types of startups that can be invested in.

"The new measure will give them a new option where they can choose investment targets from a wider range of private startups and better manage risks through diversification."

The NDRC will also rationalize rules for certain bonds issued by reputable large and medium-sized companies, and managed by commercial banks, whose proceeds are used to lend to select groups of small and micro businesses, it said.

According to Beijing-based Genial Flow Asset Management Ltd, which deals in fixed-income private funds, bond markets have always been an important financing channel for private enterprises, which makes the NDRC's latest measures helpful.

Costs, and difficulties in bond financing, escalate during economic downturns, so other approaches to supporting private enterprises, such as the promised increase in bank loans, are necessary, it said.