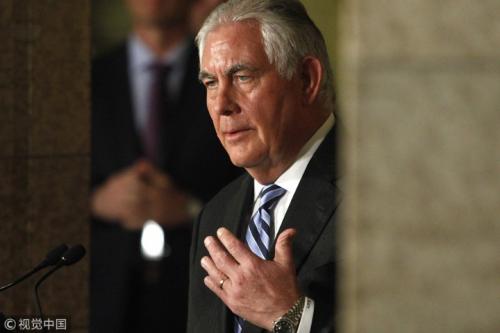 In a matter of weeks, China has seen its image upgraded from the "revisionist state" portrayed in the United States National Security Strategy to what US State Secretary Rex Tillerson calls a "new imperialist power" "reminiscent of European colonialism".

This, in the context of recent US policy statements, as was obvious in US President Donald Trump's first State of the Union address, points to a worrisome turn in the orientation of the US' China policy, something that may fundamentally change the overall picture of China-US relations.

We have talked a lot about the existence of a perception gap. This is how that gap is finally rising to the surface and likely to reshape the crucial relationship.

Tillerson's speech on Thursday, ahead of a high-profile visit to Mexico, Argentina, Peru, Colombia and Jamaica, came as a revealing indication of what China stands for in the Trump administration's eyes – a "predatory actor" "using economic statecraft to pull the region into its orbit".

The rhetoric sounds familiar. Indeed, it reminds us of what was the norm during Cold War years. Viewed through the prism of that bygone era, the growing Chinese presence in Latin America is alarming for the US. After all, that part of the Western Hemisphere is what it still regards as its "backyard".

While the Cold War paradigm no longer applies, there is every sign that the Trump White House believes it does, even though the rest of the world has moved on and is living in 2018.

Which is why what appears perfectly normal to China and other countries can look offending, even unacceptable to the US. Despite, as some Western observers have pointed out, Beijing only doing what Washington used to do, pushing free trade, multilateralism, and economic globalization.

China is now the largest trading partner with Argentina, Brazil, Chile and Peru. But why is it China? Why is not it the US? What is wrong with it being China? The four countries are in a better position than the US to judge.

And, most important of all, what harm has that done to the US, since China insists it has no intention of monopolizing trade ties?